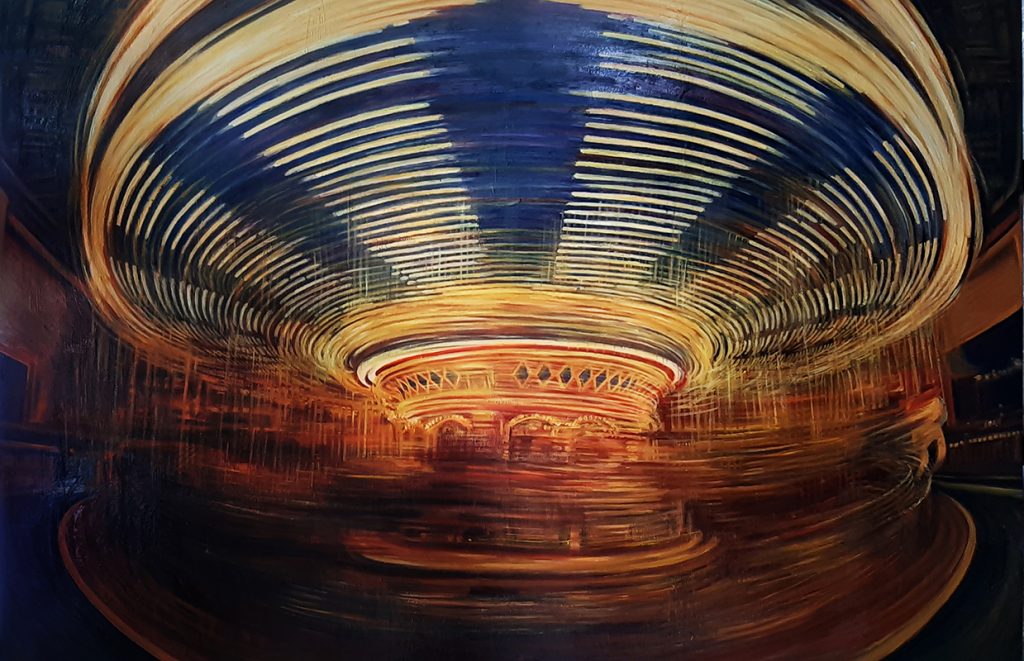 The exhibition titled “The Melting Point” by the artist Anja Tončić presents a selection of works created during Anja’s two-year long artistic and conceptual exploration of the motif of the merry-go-round.. Rather, it is the object transformed by motion that is in the focus of the artist’s attention. This movement in a closed circle of a familiar scenery is a metaphor for the dynamic of our reality. The stronger the need to find a supporting structure founded in the familiar, confirmed and certain, the stronger the sense of its absence, and a look outside causes feelings that border on the horror and joy of revealing an altered perception.
In the society and system in which we are forced to live, to escape into fiction can be comforting, but also causes the individual to lose their ability to reveal their own past, as well as the present.Life is portrayed as a vortex, a huge whirling accumulation of scenes. All that was once lived now fades into a representation. When the real world is transformed into mere images, these images become actual beings which effectively encourage a hypnotic state. (A. Tončić)
Anja Tončić (born 1996, in Serbia) graduated from the Faculty of Fine Arts in Belgrade in 2018, department of Painting, in the class of Professor Mileta Prodanović. Since 2012 her works were exhibited on numerous group exhibitions in Serbia and abroad. This is her first solo exhibition. She received lots of awards for her work.