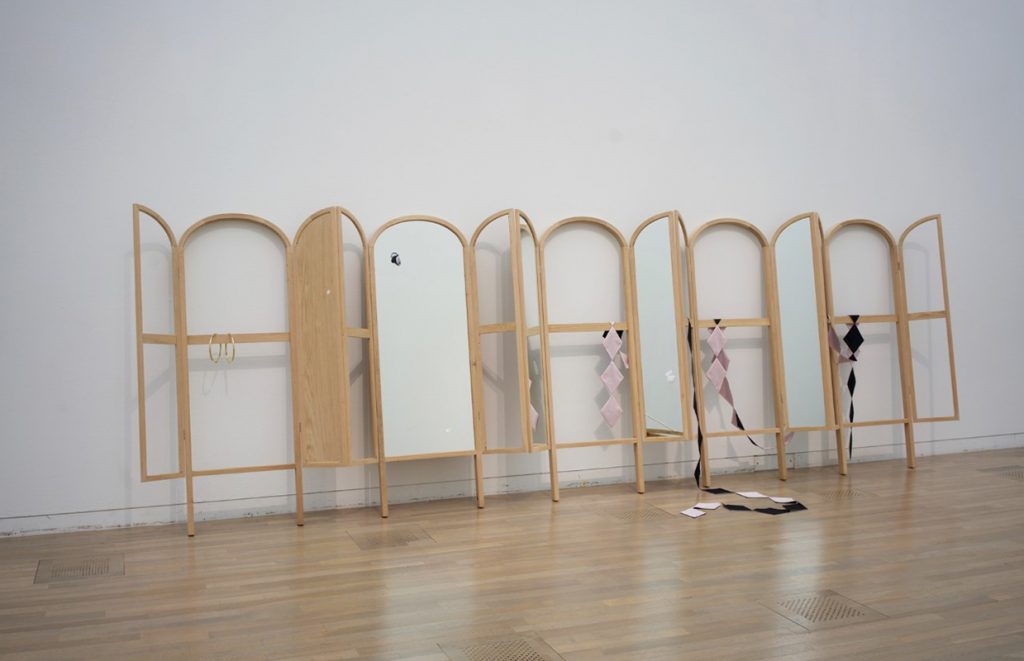 ART GALLERY, Knez Mihailova 6
Asako Shiroki, winner of the Cultural Centre of Belgrade Award at the 56th October Salon
The new works that Asako Shiroki, as the winner of the October Salon Award, will present at the KCB Art Gallery are based on processes and works from natural materials and forms of which they are made. These structures evoke the observer’s memory of pieces of furniture (wooden slats, frames, mirrors…), but then they are being deconstructed and directed toward disappearance and nothingness – toward a territory where there is no room for remembering their primary functionality. Such a procedure reveals to us a world devoid of the usual meanings and associations.
Asako Shiroki received her PhD from the Department of Fine Arts of the Tokyo University of Arts, Japan (2008). She participated in the international study programme at the Künstlerhaus Bethanien in Berlin (2013-2014). Asako Shiroki has been awarded several scholarships: Scholarship for International Research Programme from the Government of Japan (2013-2014); Scholarship from the Pola Foundation for an International Research Project and Scholarship from the Nomura Foundation, Japan (2015–2014).
ARTGET GALLERY, Trg republike 5/1
Legends of War Photography in Serbia: Lewis Wickes Hine, Ariel Vergis, Samson Chernov; Curator Milena Marjanović
Hine, Vergis, and Chernov, each their own way and on their own mission, stayed in Serbia, on the Balkan/Salonika Front, as war photojournalists. Hine arrived in 1918 through the US Red Cross. Vergis came in 1916 as a correspondent for The Miami News to report from the war fronts in the Balkans, and Chernov was sent to Serbia as a correspondent for the Russian daily Novoe Vremya and monthly Russkoe Slovo, but later became a contributor to the French weekly L’Illustration. Hine’s and Vergis’ photographs, borrowed from the Library of Congress in Washington and the Military Museum in London, will be presented in Serbia for the first time.
PODROOM GALLERY, Trg republike 5/1
Anica Vučetić, BETWEEN WORLDS
The exhibition space of the Podroom Gallery, transformed with moving pictures into a kind of theatre, takes the visitors into a world in which the author wonders about the concepts of the other-worldly, of duration, passage of time, purposefulness of existence, possibilities for action and change. The narrative is a part of the whole of the ambience, where noises, sounds, light, darkness and the experience of space are important for understanding the relationship that arises in the interaction between the inner world of the individual and the world surrounding us all.
Anica Vučetić, born in Belgrade in 1962, graduated and received her master’s degree from the Faculty of Fine Arts in Belgrade, Painting Department. She deals with video installations and ambiences/spaces.
The realization of the exhibition was supported by the Film Centre of Serbia, City of Belgrade, Ministry of Culture and Information of the Republic of Serbia and Pogon.
Film Gallery – KCB Film Theatre, Kolarčeva 6
MILOŠ TOMIĆ, FAILED REMAKE
FAILED REMAKE is not really my worst and dead-end films, unfinished productions and arty home videos in a pile. This… um… is not a retrospective, a small monument – it’s not!… These are maybe: Lush, juicy, collage films that would, using experimental method, explore the world of memories, transience, the inner and the old-fashioned world. An infinite field of possibilities, perhaps a dangerous, i.e., seductive but priceless mine bigger than a lifetime!, as it says in my film diary, at least 20 years old.
Miloš Tomić, born in Belgrade in 1976, graduated in Film Directing from the Faculty of Dramatic Arts in Belgrade in 2001, under Professor Miša Radivojević. He received his master’s degree from the FAMU Film Academy in Prague in 2006, Department of Multimedia Animation, in the class of Professor Petr Skala, and in 2013, at the same academy, defended his doctoral thesis “Preciousness of discarded objects – trash as the material for film, animation, photography”. He is one of the founders of the legendary group “Klipani u pudingu” (Bumpkins in Pudding), a passionate collector and patient collagist, an active participant and promoter of the “LO-Fi” Festival, who fought for free, cheap and independent film in the 1990s, and for the past several years has been a professor at the Faculty of Media and Communication in Belgrade, Department of Digital Arts and New Media. As an artist, he has presented his works at numerous exhibitions throughout the region and Europe. He is known for his experimental films and video works, music videos for some of the local bands, collages and art actions. He toured the world holding workshops on trick animation and creativity in general with students and young people, participating in festivals from France, Norway, Italy or Spain, through Macedonia and Estonia to China, Argentina and Burma. His art career gained new momentum in 2013 when he, together with Vladimir Perić, represented Serbia at the Venice Biennale with the project Musical Diaries, made of short films in which daily, often family, kitchen situations become amateur music improvisations.