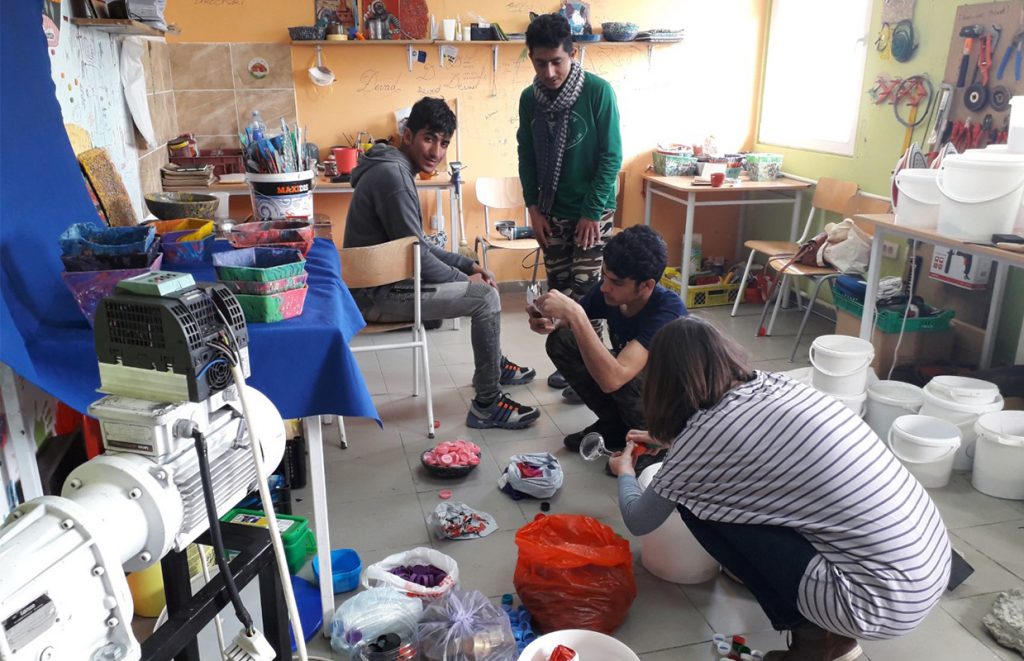 In order to examine the possibility of organizing the production process in a way that could achieve greater economic (and therefore social) equality, in 2017, an experimental manufacturing facility was launched by a group of artists, activists and scientists dedicated to developing and employing affordable technologies for processing waste plastics, whose work could involve some of the most vulnerable social groups. Since 2018, the Minipogon has been operating in its workshop located in the Krnjaca Asylum Center, where many camp residents and other interested individuals could join the work process. In order to generate new values ​​from the ‘margins’, in its work Minipog operates with the rejected and by-products of the capitalist society, whether it concerns material resources (plastic waste, as a derivative of fossil oils, today the most exploited and devalued material from the natural environment) or human resources / the composition of the working collective (refugees as a direct consequence of globalization, the unemployed, precarised, the informal recycling sector, etc.).
The members of the collective themselves carry out all the steps necessary to make the production process possible. The construction of machines in their own arrangement provides the necessary means of production, which otherwise would remain inaccessible to a wider range of users due to licenses and copyrights of the industrial sector. The work process also involves the formation of channels for the procurement of raw materials (recycling plastics) and its preparation for processing, designing new products, molud making, production and finishing of final products, and finally establishing new distribution (sales or exchange) channels. Through consultations, discussions and shared decision-making, the work process through all its segments (eg sharing responsibilities and revenues) also icludes a shared reflection on how the whole working process is carried out.
Through a process of work in which new functional and long-lasting objects are created from the discarded, new more respectfull relations to the material (material environment), as well as those between people (collaborators), from which any form of exploitation is excluded are established, while new values opposed to the monetary ones ​​are generated.